West Sioux, ranked No. 9 in Class 1A, scored two touchdowns in the first quarter and added one score in the second and another in the third to build a 26-0 lead and the Falcons held on for a 26-14 win over Sioux Central last Friday at Sioux Rapids. West Sioux (7-1) clinched the district title with the win. Sioux […]

The playoffs are not in the cards for Sioux Central this season, so the Rebels will be finishing the regular season by hosting district leader West Sioux tonight in Sioux Rapids. The Falcons are 6-1 and ranked ninth in Class 1A. Sioux Central coach Brandon Goodchild gave his thoughts on West Sioux after watching them on film this week. “They […]

Western Christian scored two touchdowns in the first quarter to build an early 14-0 lead and the Wolfpack’s defense took over from there as they defeated Sioux Central 21-8 in a district game last Friday at Hull. The Wolfpack opened the scoring when Ty Van Essen threw a 5-yard touchdown pass to Wyatt Gulker. Western Christian made it 14-0 when […]

It goes without saying that Western Christian may be one of the best 2-4 teams in the state in Class 1A. The Wolfpack have lost three games to ranked teams in West Lyon, Boyden-Hull/Rock Valley and Spirit Lake and one to the district leader in West Sioux. Sioux Central’s opponent tonight in Hull has certainly been battle tested. “This is […] 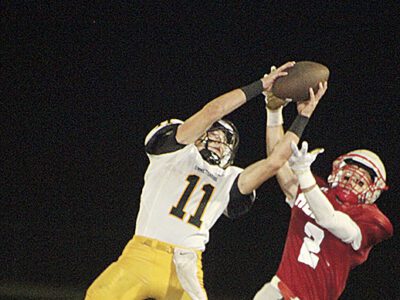 Emmetsburg held Sioux Central to just 78 yards of total offense as the E-Hawks defeated the Rebels 28-6 last Friday at Sioux Rapids. Emmetsburg took a 7-0 lead on its first possession of the game when Seth Freeman scored on a 2-yard run. The E-Hawks went ahead 14-0 in the second quarter on a 1-yard run by Cade Shirk. Freeman […]

Sioux Central seeks to get right against Emmetsburg

One team is coming off its first win of the season while the other is stinging from a homecoming loss last week. Emmetsburg is the former and Sioux Central the latter. The two teams will meet tonight in Sioux Rapids. Sioux Central coach Brandon Goodchild gave his thoughts on the E-Hawks after watching them on tape. “They are physical and […] 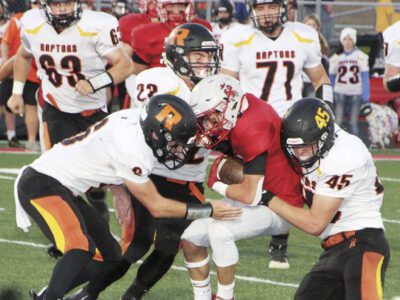 Cade Harriman rushed for 115 yards and a touchdown and Ridge View’s defense kept Sioux Central scoreless for the first three quarters as the Raptors came away with a 20-6 win last Friday night at Sioux Rapids. After a scoreless first quarter, Harriman got the Raptors on the scoreboard with a 3-yard touchdown run. The PAT failed and it was […]

One team will be putting its unbeaten district record on the line while the other will be trying to stay in the title hunt when Sioux Central and Ridge View square off tonight in Sioux Rapids. Sioux Central won its district opener last week while Ridge View dropped theirs. Sioux Central coach Brandon Goodchild gave his thoughts on the Raptors. […]

Sioux Central scored 21 unanswered points in the second half as the Rebels pulled away from an 8-2 halftime lead en route to a 29-2 win over Sibley-Ocheyedan last Friday at Sibley. Sioux Central scored a touchdown in the third quarter and two in the fourth. The Rebels finished the game with 277 yards of total offense, including 243 rushing. […]

Sioux Central looks to use district opener for a fresh start

Rebels pay a visit to Sibley-Ocheyedan

Sioux Central will look for a fresh start when the Rebels begin district play by facing a Sibley-Ocheyedan team that has had a struggling start tonight at Sibley. The Generals are 0-3 after a 40-0 loss to Sheldon last week. Sioux Central coach Brandon Goodchild offered his thoughts on the Generals after watching them on tape. “They will put a […]