Joe Benson pitched a five-hitter and struck out 12 on the mound, and hit a two-run home run at the plate to help Cherokee defeat Sioux Central 8-2 in a Class 2A district quarterfinal game on Monday. The Braves scored two unearned runs in the second inning, three unearned runs in the fourth, one in the fifth and two in […]

Sioux Central plated nine runs in the top of the seventh inning to break a 2-2 tie as the Rebels went on to beat Cherokee 11-2 on Wednesday in Cherokee. The Rebels finished with nine hits. Jacob Hargens led the way with three singles and a double. Gibson Olson added two hits, including a double. Olson and Hargens each scored […]

Kingsley-Pierson too much for Sioux Central 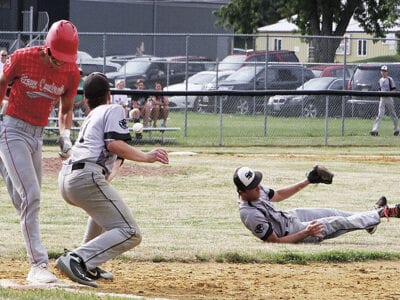 Gibson Olson had two hits and drove in two runs, and Gavin Morton scattered eight hits over 61⁄3 innings to help Sioux Central get past Alta-Aurelia 4-2 on Wednesday at Alta. The Rebels scored a run in the first inning on an RBI single by Gibson Olson. Alta Aurelia answered in the bottom of the first on an RBI single […]

Jacob Hargens hit a two-run home run and fired a six-hit shutout to help Sioux Central to a 7-0 win over MMCRU in a nonconference game on Tuesday at Marcus. Sioux Central scored three runs in the third inning, one in the fourth, two in the fifth and one in the sixth. The Rebels finished with seven hits in the […]

Sioux Central stymied on one hit in loss to West Sioux

Mason Coppock stymied Sioux Central on one hit as West Sioux defeated the Rebels 3-0 in the Granville Spalding Tournament last Friday. The Rebels’ second game of the day was canceled because of weather. The Falcons scored a run in the third inning and two in the fifth. Gibson Olson had the only hit for Sioux Central — a double. […]

Landon Olson and Konnor McKeever combined to pitch a no-hitter to help Sioux Central beat Twin Lakes Conference rival Storm Lake St. Mary’s 15-0 on Wednesday at Peterson. Olson walked four and struck out four in three innings of work while McKeever walked none and struck out one in one inning. Sioux Central tallied seven hits in the game. Gavin […]

A six-run deficit early proved to be too much to overcome for Sioux Central as the Rebels were defeated by Pocahontas Area 9-7 last Friday in a Twin Lakes Conference game at Pocahontas. The Indians scored three runs in the first inning and three more in the second. The Rebels plated five runs in the third to pull within 6-5, […]

Sioux Central scored eight runs in the top of the sixth inning to break the game open as the Rebels beat East Sac County 12-0 in a Twin Lakes Conference game on Monday at Sac City. The Rebels finished with 12 hits in the game. Jacob Hargens and Landon Olson each had three to lead the way. Ethan Mills added […]