Logan Pickhinke won both of his matches by pin to highlight Ridge View’s performance in a double dual last Thursday at Lawton. The Raptors were defeated by Lawton-Bronson 42-36. The Eagles won the first six matches to build a 30-0 lead. Ridge View won the next five matches to rally. Clayton Jacobson won his match by pin in 2:39 at […]

Else, Edwards runners-up at Kingsley-Pierson tourney

Lucas Else and Tanner Edwards each finished second to lead Ridge View at the Kingsley-Pierson Tournament last Saturday. West Sioux won the meet with 272.5 points. Ridge View was seventh with 71. Else (19-9) placed second at 145 pounds. He won his quarterfinal match by technical fall 15-0 and won in the semifinals by decision 3-1. In the finals, Else […]

Raptor wins all six of her matches at 155

Isabella Deeds is a state champion. The Ridge View wrestler captured the state title at 155 pounds during last weekend’s IWCOA girls state tournament in Coralville. Deeds (6-0) won the title after beating Aine Moffit of Pleasant Valley in the finals by decision 6-3. Deeds won her first match by pin in 1:20. She then won by pin in 15 […]

Tanner Edwards finished sixth at his weight class to highlight Ridge View’s performance in the Herb Irgens Invitational last Saturday at Ida Grove. Don Bosco won the meet with 245.5 points. Ridge View was 22nd with 19. Edwards won his first match by pin in 3:40. In the quarterfinals, Edwards was defeated by pin in 46 seconds. He won by […]

Logan Pickhinke captured a conference championship and Ian Shepherd and Tanner Edwards each finished third at their respective weight class to help Ridge View place seventh in the Western Valley Conference wrestling tournament last Saturday at Mapleton. West Monona won the meet with 240 points. The Raptors scored 92. Pickhinke (16-5) claimed the title at 220 pounds. He won by […]

Seven wrestlers were double-winners to help Ridge View pick up a pair of dual wins on Tuesday night. Ridge View beat Denison-Schleswig 58-21. Logan Pickhinke won his match by pin in 2:50 at 285 pounds while Conner Jacobson won by major decision 13-5 at 138. Lucas Else was a winner by pin in 4:40 at 145, as was Austin Pyle […]

RV breaks even in pair of duals

Else places second to lead RV at WS

Lucas Else placed second at 145 pounds to highlight Ridge View’s performance in the West Sioux Invitational last Saturday at Hawarden. Brookings (S.D.) won the meet with 213 points. Ridge View was seventh with 70. Else won his first match by decision 5-3 before being defeated by pin in 43 seconds in the second round. Else then won by pin […] 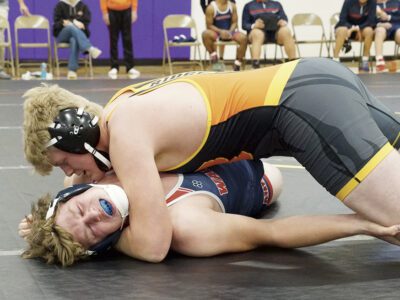 Ridge View hosted its Raptor Duals last Saturday and the team picked up a pair of dual wins in three matches. Ridge View defeated Alta-Aurelia 45-36. Jolynn Tiefenthaler won her match by decision 8-6 at 120 while Daynia Werner won by pin in 1:27 at 182. Tanner Edwards stuck his opponent in 3:10 at 220. Tatum Shepherd (126), Lucas Else […]

Tanner Edwards and Logan Pickhinke each won all three of their matches to help Ridge View pick up a pair of Western Valley Conference wins last Thursday at Moville. Ridge View defeated Lawton-Bronson 54-27. Kim Meyer won her match by pin in 19 seconds at 113 pounds, as did Jolynn Tiefenthaler in 1:45 at 120. Tatum Shepherd was a winner […]