Ridge View had two players represented on the first team, two on the second team and two on the honorable mention list as the Western Valley Conference teams were released for girls basketball. Voted to the first team by the league’s coaches were Madison Stowater and Emma Vohs. Stowater was a unanimous selection. Joining them on the first team were […]

Central Lyon proves to be too much for Ridge View, 67-41

Ridge View fell behind early only to make a furious rally after that, but it wasn’t enough as No. 3-ranked Central Lyon regained the momentum in the second half to come away with a 67-41 win in a Class 1A regional final game on Wednesday at Kingsley. Central Lyon (22-2) scored the first 13 points of the game before Ridge View […]

Who says beating the same team three times in a season is difficult. Ridge View played Western Valley Conference rival West Monona twice during the regular season and won both meetings by single digits. The third time wasn’t close as the Raptors advanced to the regional finals after a 68-42 win over the Spartans in a Class 2A regional semifinal […]

Ridge View used balanced scoring to lead from start to finish as the Raptors advanced to the regional semifinals after a 46-36 win over Rock Valley in a Class 1A regional quarterfinal on Tuesday at Holstein. Ridge View, now 18-4, will play Western Valley Conference rival West Monona (17-5) in a regional semifinal game today at 7 p.m. in Holstein. […] 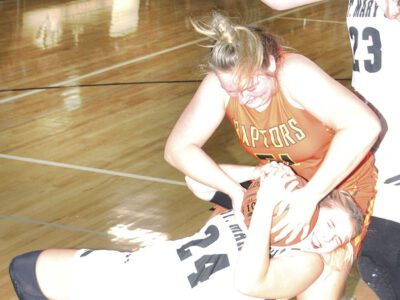 SM girls use third quarter spurt to get past Ridge View

Storm Lake St. Mary’s, ranked No. 9 in Class 1A, scored eight unanswered points late in the third quarter to take control as the Panthers got past Class 2A No. 15 Ridge View 53-48 in a nonconference game on Monday night at St. Mary’s Gym. The game was tied at 4-4 when Ridge View scored six straight points to grab […]

The road to the girls state basketball tournament begins for area prep teams on Thursday. In Class 1A, Storm Lake St. Mary’s (18-1) will begin its quest for a first-ever trip to state when the Panthers take on Harris-Lake Park (2-17) in the first round at St. Mary’s. The winner plays either Le Mars Gehlen (8-11) or Trinity Christian (3-16) […]

Ridge View outscored Westwood 37-30 over the second and third quarters and then held off a late rally by the Rebels to win the Western Valley Conference tournament championship 47-45 last Saturday at Lawton. The Raptors led 5-3 after the first quarter and took a 29-22 lead at halftime. It was 42-33 Raptors after three quarter before Westwood finished the […]

Ridge View used a 13-6 spurt in the third quarter to take control and the Raptors went on to hold off West Monona 50-43 in the semifinals of the Western Valley Conference Tournament on Monday at Holstein. Ridge View held a 19-11 lead after the first quarter, but West Monona rallied to tie the game at 27-27 by halftime. The […] 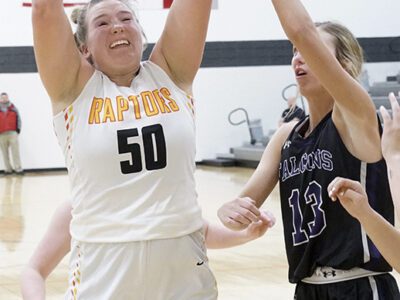 Madison Stowater finished with 25 points, four rebounds, four assists, two steals and three blocked shots to help Ridge View open the Western Valley Conference Tournament with a 62-35 win over OABCIG last Thursday. Ridge View jumped out to a 16-7 lead after the first quarter. The Raptors extended their lead to 34-19 by halftime. It was 48-25 after three […]

Ridge View outscored Ar-We-Va 17-6 in the first quarter and the Raptors were never threatened after that as they went on to beat the Rockets 58-17 in a nonconference game on Monday at Schaller. The Raptors extended their lead to 36-10 by halftime. It was 50-15 after three periods. “We played fairly well and moved the ball nicely around their […]