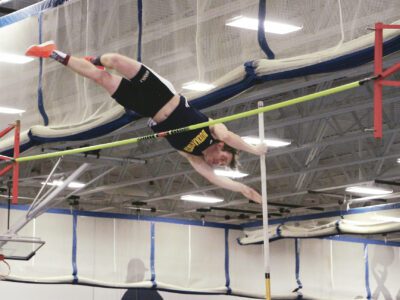 Buena Vista finished first in six events as the Beavers hosted the BVU Early Bird Invitational last Saturday at J. Leslie Rollins Stadium. Despite cool and breezy conditions, the Beavers managed to post several solid times and distances throughout the day. Kyle Miller was the champion in the 800 meters with a time of 2 minutes, 1.54 seconds. Greg Tystahl […] 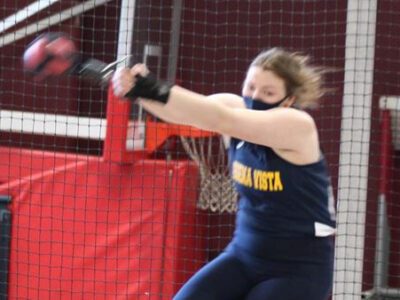 Buena Vista claimed four all-conference accolades and capped off a fifth place overall team finish to wrap up the American Rivers Conference Indoor Track and Field Championships hosted by the University of Dubuque last weekend. Becca Simpson had a big weekend by claiming two of those all-conference spots, including a conference championship in the shot put last Friday. She turned […]

Becca Simpson claimed the javelin title to give Buena Vista its second conference champion of the week as the Beavers wrapped up a strong American Rivers Conference Championship with its highest score in over 20 years. Simpson won the javelin with a stadium record toss of 40.70 meters and won the event by nearly nine feet. Her victory gave BVU […]

Buena Vista got its outdoor track and field schedule under way by capturing a handful of top-10 finishes in the Dordt Invitational last Thursday. Jade Hays and Katara Jondle placed sixth and seventh, respectively, in the 200 meters with Jessica Sump taking fifth in the 100 meter hurdles and Tabitha Guyett placing second in the 400 meter hurdles. Emily Hoesing […]

The final day of the DIII Elite Track and Field Championships also wrapped up the indoor season for the Buena Vista track and field teams, but not before more season best marks were captured by the select individuals who were in action. Lane Jellison posted a personal best mark in the shot put of 14.24 meters to finish eighth overall. […]

For the second straight week, Becca Simpson set the school’s weight throw record, while Emily Hoesing set a new mark in the mile as the two highlighted the day for the Buena Vista women’s indoor track and field team that went up against a pair of nationally-ranked teams last Saturday. Simpson posted a mark of 16.36 meters to surpass her […]

The Buena Vista women’s track and field team turned in yet another strong performance last Saturday, winning three individual titles and finishing second overall with 80 points as the team took part in the Dubuque Triangular. Jadyn Forbes set a new facility record when she won the 800 meters in 2:26.61. Kiana Roderick finished just seconds off the pace in […]

For the second straight week, the Buena Vista women’s track and field team got to compete on its own surface as the Beavers came away with a second-place team finish in an American Rivers Conference triangular meet against Wartburg and Simpson last Saturday. BVU had a number of top-three finishes. Jessica Sump took second in the 60 meter hurdles with […]

Buena Vista’s Emily Hoesing took the title in the 3,000-meter run while Becca Simpson landed the top spot in both the shot put and weight throw to help lead the BVU women’s track and field team as it began its indoor season by hosting a triangular against both Luther and Nebraska Wesleyan last Saturday. Hoesing posted a time of 10:52.09 […]