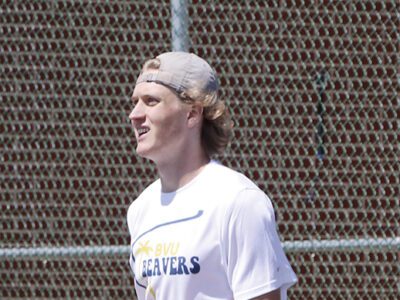 BVU No. 1 singles player praises teammates up and down the roster after 3-0 trip

Buena Vista University senior Danny Kramer enjoyed the trip back from spring break this year, perhaps more than any other. The reason: BVU went 3-0 in competition on beautiful Hilton Head Island in South Carolina. “Four freshmen came up huge for us,” said Kramer, who has played the No. 1 singles spot for BVU the past two seasons. “You want […]

Having to battle the elements and the top two teams in American Rivers Conference last Saturday, the BVU women’s tennis team fell in two matches. Wartburg and Luther, the top two teams the last few years in the conference, shut out the Beavers on a day when rained forced competitions inside the Lamberti Recreation Center in Storm Lake. Despite not […]

It came down to the final match of the afternoon, and freshman Joshua Woolcott’s win gave Buena Vista a 4-3 win over Mount Marty on Monday. Playing a GPAC style of scoring, the Beavers needed four wins in singles to complete the afternoon victory after losing two of three matches in doubles. In doubles, the Lancers won both the No. […]