Note: this story has been updated with clarifications sent by the City of Storm Lake’s finance department.

Revenue generated by the City of Storm Lake’s tax increment financing districts is expected to double next year, which brings the city and Buena Vista County closer to a resolution over the county’s miscalculation of the city’s TIF revenues and valuations.

Finance Manager Brian Oakleaf told the city council the TIF revenue estimate for fiscal year 2024 is “our first substantial and material movement” on the dispute with the county auditor’s office.

The city is estimating $1.7 million in TIF revenues next year. The districts only generated $854,000 in revenue this year and around $750,000 the year previous.

“Moving forward, I think the numbers are adding up the way we think they’re supposed to,” Oakleaf told the council on Jan. 3. “So again, it’s kind of the biggest step.”

Karla Ahrendsen, a TIF specialist with the Buena Vista County Auditor’s Office, acknowledged the city’s TIF valuations and distributions were modified before they were sent to the department of management. Ahrendsen said she “double-checked” every parcel in each of the city’s urban renewal areas; she assured each of the parcels’ frozen bases and incremental values matched their corresponding values on their property-tax records.

“On our side, all the parcels were taken back to their frozen base and (incremental values). If it went in the wrong bucket, we made sure it got into the right one,” Ahrendsen said.

In November, the city found the auditor’s office was misallocating revenue generated by parcels where tax-increment financing was applicable.

For Tyson’s $8 million feedmill property on Radio Road, the auditor was scheduled to distribute $320,000 to 28 levies without any tax-increment financing allocation. The largest share is $137,000 in payments to Storm Lake School District and the smallest share is a $1,542 payment to Buena Vista County Agricultural Extension.

The overall distribution amount was correct, according to an analysis Oakleaf’s office showed the city council last week.

But around 35 tax levies were supposed to receive money, not 28, according to the analysis.

That doesn’t mean the school district will receive 3% of what it would have under the new distribution formula, Oakleaf cautioned. Of the 35 levies that are expected to receive payments from the feedmill property, nine of them flow to Storm Lake School District, according to Oakleaf’s analysis. Under the auditor’s previous distributions, the school district was only receiving payments from six levies.

“This is about revenue that wasn’t going in the right place. This isn’t about the school district or the county getting more money than the city. That’s not why we started looking into this,” Oakleaf said in an interview after the meeting.

Oakleaf hopes that by July the city can reverse what has been curiously slow TIF revenue growth over the last 15 years.

A burgeoning debt load — at present around $27.6 million — swallowed whatever revenues TIF areas could generate during that time.

Oakleaf expects the balance to decrease and possibly lower to zero by 2038. The first step is the city paying off “internal loans” that were made to the city’s TIF areas in the form of water, wastewater and road improvements financed by bonds issued against the areas’ future valuations. The TIF areas also have internal obligations to the general fund, stormwater and King’s Pointe.

“We built roads, we extended water and sewer to new developments. That was paid for with TIF debt,” Oakleaf explained. “The street department needs to get paid what it spent. The water and sewer departments need to get repaid.”

Oakleaf acknowledged some of those internal loans were paid off by financing sources in addition to TIF revenues, which were so tepid that they couldn’t pay the balance. Water and sewer ratepayers, for example, paid off TIF debt incurred from infrastructure extensions to new developments like the Third Addition.

King’s Pointe Resort — which sits in the largest TIF area in terms of valuation — barely made payments on bonds that were issued when the resort opened in 2007. Major renovations to the resort were paused because the resort and its surrounding TIF area were saddled with debt that city officials thought couldn’t be serviced with existing revenues. The hotel’s revenues were supposed to cover its property tax payments; they didn’t, contrary to the district’s urban renewal plan.

Oakleaf expects all that to change. 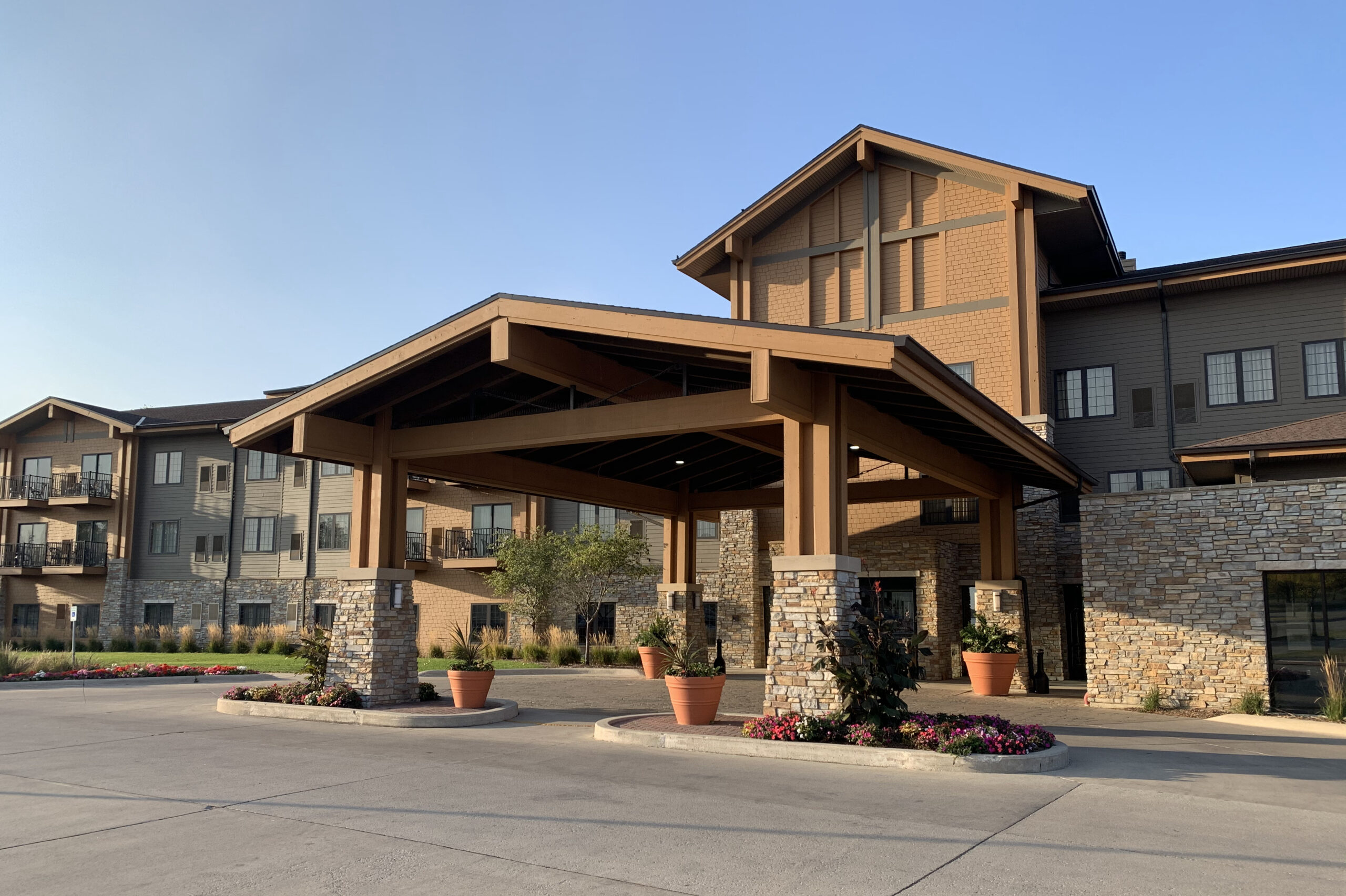 King’s Pointe Resort, which is owned by the City of Storm Lake, opened its doors in 2007.

The TIF area that surrounds King’s Pointe will generate around $1.3 million in TIF revenue next year, per the refigured calculations the auditor’s office submitted to the department of management. It generated less than half that amount this year. Any renovations to the resort and its ancillary properties must be paid for by TIF revenues, resort profits or both. The original urban renewal agreements that established Project Awaysis placed onus on the resort and TIF revenues to refresh the resort, the waterpark and golf course. The resort, as expected, has been profitable. TIF revenues haven’t kept up with the Project Awaysis framers’ original expectations.

TIF revenues generated by the industrial park area, which covers King’s Pointe, have decreased 12% since 2016.

“A payoff of all the TIF debt is feasible if what has been submitted to the state is what we’ll get in the future,” Oakleaf said.

Oakleaf figures the city should post a net gain from the redistribution even though the city general fund will likely lose 2.5% of revenue, or around $121,000. Oakleaf noted the general fund is the second-largest financing source of the redistribution to TIF areas — the largest taxing entity is Storm Lake School District. Spreading out revenue from 28 levies to 35 required adjustments in levies that were being overfunded in the first place, he acknowledged.

“We’re down $121,000 for the whole city and we’re paying that back (from TIF),” Oakleaf said. The increased TIF collection will essentially backfill whatever losses the general fund will incur.

It’s unclear what the overall impact the redistribution will have on the other major taxing entities.

Oakleaf noted the extent of corrections was a redistribution of revenue from traditional property-tax levies to TIF levies.

A correction the city demanded from the county was an unexplained change in 2016 in the base value of the city’s industrial urban renewal area. The area’s base value jumped from $9.3 million to $12.7 million; its incremental value dipped from $12.7 million to $9.7 million. The overall effect was an implicit distribution from tax-increment financing revenues to traditional property taxing entities.

Correcting those values involves increasing valuations, which benefits all taxing entities, including property tax levies that have been overfunded at the expense of TIF. Just because those entities benefited disproportionately from years of misallocations doesn’t mean they’ll end up losing from correct distributions, Oakleaf explained.

“A big part of this was identifying where the (base and increment) valuations weren’t right,” Oakleaf said.

Oakleaf said other taxing entities haven’t expressed concern of what will likely be a $900,000 transfer from traditional property-tax sources to TIF revenues.

Ahrendsen, the county auditor’s deputy, said the top priority was submitting the correct valuations to the state. Determining the ripple effects of a redistribution wasn’t the main focus of what has been weeks of investigation by the auditor and Oakleaf’s office, Oakleaf stressed.

“We think (the county) got the right numbers to the state. That was our main focus. It’s all we could focus on,” he added.

The extent of losses sustained by TIF districts over the years at the expense of traditional property tax sources hasn’t been estimated. The county has only acknowledged miscalculations dating back to Jan. 1, 2016, around the time a fire consumed what’s now Tyson’s turkey plant. Oakleaf believes the losses could even predate the fire.

A separate analysis Oakleaf presented to the city council in November showed curiously low TIF revenue distributions to King’s Pointe dating back to 2008.

Ahrendsen acknowledged the county auditor’s office suffered from turnover while it was switching its tax-increment financing software.

“Some things got missed in the shuffle,” said Ahrendsen when asked about whether the county misallocated city TIF funds. “We had employee turnover.”

Ahrendsen noted the city also experienced staff turnover at the time the industrial park’s base and increment valuations were miscalculated. Oakleaf was named finance manager in September 2016. He filled the position that was vacant for five months; before that, two finance managers resigned within five months.

“The city had turnover, too,” Ahrendsen added.

The department of management has only affirmed revenue misallocations dating back to 2016. Further investigation into years prior to 2016 would require records that substantiated an allegation that more funds were misallocated. Those records aren’t in the city’s possession. They’re owned by the county, which doesn’t maintain TIF distribution records that are five years or older.

Oakleaf acknowledged there might not ever be a way to know how much money was misallocated.

“All we have are the records for King’s Pointe,” Oakleaf said.