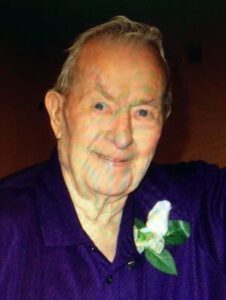 Russell Charles Waffle Haubrich, 95, of Aurelia, formerly of Fonda, passed away on Saturday, May 7, 2022 at his home with family by his side.

Funeral Mass will take place Friday, May 13, at 1 p.m. at Our Lady of Good Counsel Church in Fonda, with visitation one hour prior to the service at the church. Burial will be in Mt. Zion Catholic Cemetery. Visitation will be held Thursday, May 12, from 4-7 p.m. at Fratzke & Jensen Funeral Home in Storm Lake.

Russell Charles Waffle Haubrich was born July 14, 1927 in Grand Island, Neb. to LeRoy and Jennie Agnes McQuown Waffle. He attended school in Council Bluffs until his mother passed away in 1936. He was then placed at Boy’s Town. In 1939, Russ was adopted by Walter and Kunigunda (Vetter) Haubrich and moved to New Ulm, Minn., where he attended Holy Trinity grade and high school, graduating in 1945. Russ assisted his parents with working on the farm. Russ attended St. John’s University in Collegeville, Minn. for two years after which he returned to farming.

Russ married Dolores (Dee) Schmidt on April 15, 1952. To this union, four children were born: Steve, Alan, Paula and William (Bill). Russ worked for Lambert Lumber Yards in Sleepy Eye, Sanborn and New Ulm, Minn. In 1959, Russ took a position with Vinton Corn Company of Vinton as a district manager. In 1960, Russ, Dee, Steve and Alan moved to Storm Lake where Paula and Bill came along. In 1967, the family moved to Fonda where Russ and Ray Miller started their own grain handling and storage bin business on the edge of town. On July 1, 1971, Russ took over the DX Service Station in Fonda and continued there under various oil company names with Lawrence White. Russ retired in 1995. In 2011, Russ and Dee moved to Storm Lake. In 2016, Russ moved to Aurelia to live with Paula and husband Kevin after surgery.

Russ was a member of Our Lady of Good Counsel Church and Knights of Columbus. Russ enjoyed travelling around the world daily with his church services on EWTN, watching television and especially taking care of Paula’s dog, Wolfie. They were best buddies.