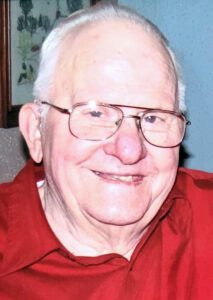 Peter James Houska was born on Aug. 12, 1929, to parents Peter and Florence (Eschen) Houska in Delaware County. Peter graduated from Lamont High School at the age of 16. He served in the U.S. Marines from 1951-53, and was discharged from the Marine Reserve in 1959. He was scheduled to deploy to Korea but was injured in a car accident and unable to ship out.

Peter met the love of his life, Janice Kane, at a dance while he was on leave. They were united in marriage on Feb. 8, 1954, in Fairbank. This union was blessed with six children: Mary, John, James, Michael, Peter Jr. and Anthony. Peter and Janice raised their family in the Dundee, Gladbrook and Clemons areas until 1974, when they moved to Sac City.

Peter managed a hog facility and later became owner. He continually gathered knowledge about swine production and was progressive in his family swine operation.

Peter taught his children the importance of community service by example. Peter was an active member of St. Mary’s Parish serving as CCD teacher, lector, Eucharistic Minister and the Christmas party Santa. He was an active member of Knights of Columbus and earned his Fourth Degree. He served as a 4-H leader and a swine superintendent.

Peter was honored several times for his service. He was named Iowa Knight of the Year, inducted into the Iowa 4-H Hall of Fame and Sac County Master Pork Producer. Peter was a member of Lamont American Legion. He participated in a Freedom Flight trip and was later presented with a Quilt of Valor.

After Peter retired, he and Janice enjoyed attending Knights of Columbus conventions and traveling. Peter was an avid gardener and proudly shared his produce with everyone. Peter enjoyed following his kids and grandkids as they played sports or showed their hogs, rabbits and sheep. He was able to see pictures of the great-grandchildren as they showed for the first time. Peter’s laughter and joking personality will be dearly missed by his family and friends.