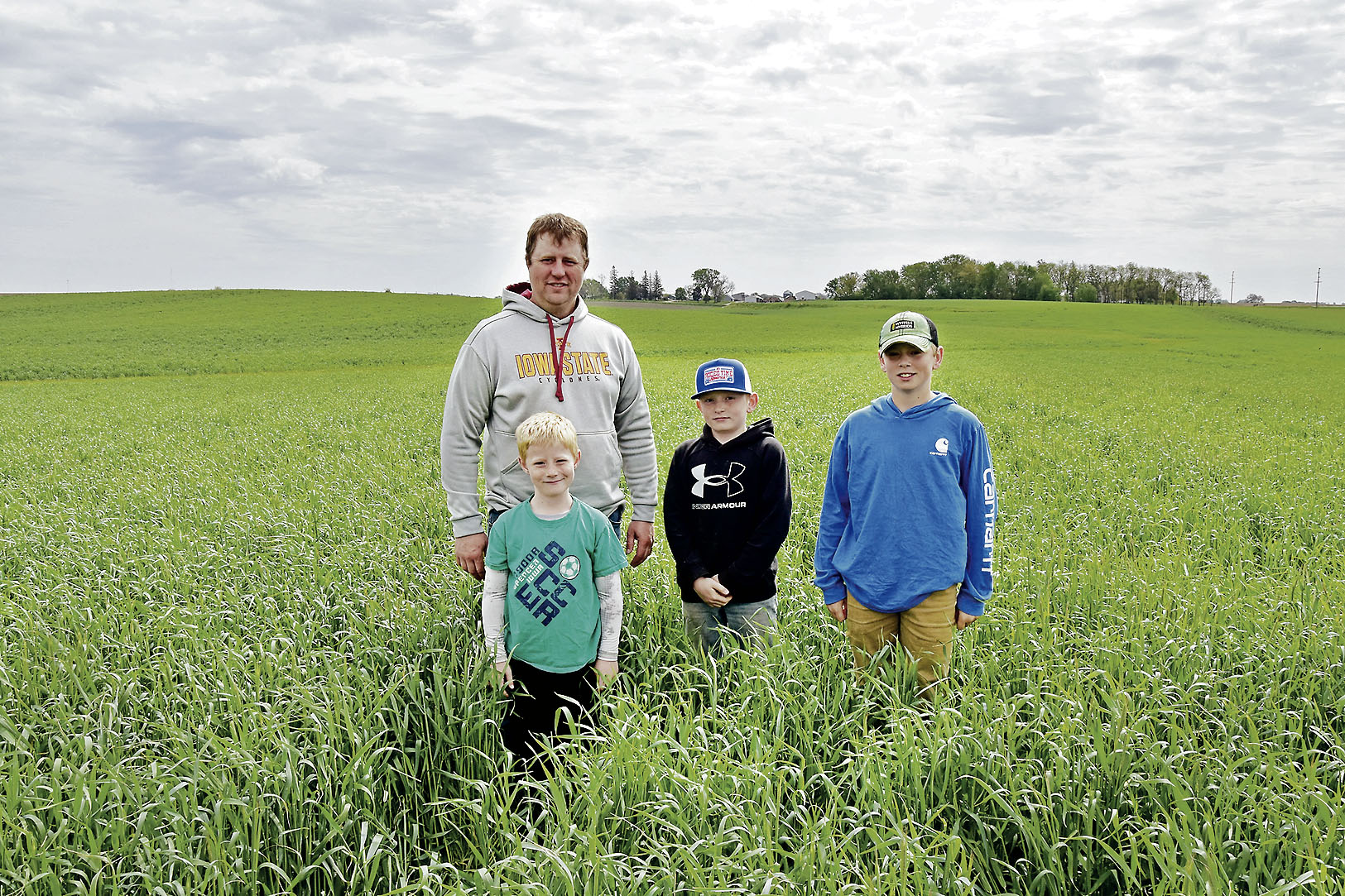 Prior to planting soybeans, Aaron Nelson stops for a picture with his three boys on cropland near Linn Grove. The cereal rye cover crops are nearly waste-high on the boys and ready to be terminated.

Feeling a responsibility to keep the family farm in good shape for future generations, Buena Vista County farmer Aaron Nelson is using conservation management practices such as cover crops, no-till, and strip-till to keep the soil in place and improve overall soil health.

He showcased the benefits of his conservation practices when a May 12 windstorm blew through his farm. A cloud of dust resembling the 1930s Dust Bowl whipped threw, bringing air born soil from South Dakota and Nebraska.

“I really felt good having some cover crops out there and crop residue on the corn ground,” said Nelson. “That was a tremendous cloud of dust that highlighted the importance of keeping cover on the ground.”

Nelson farms about 900 cropland acres near Linn Grove. He also has 500 acres of river bottom and timber pasture, where his 120-head cow herd grazes.

He says parts of what he farms have been in the family for more than 130 years. 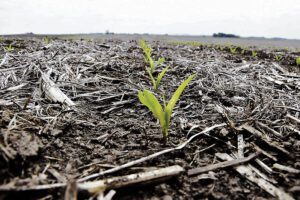 Newly planted corn begins to peek through in late May 2022. Aaron Nelson strip-tills this particular ground.

Nelson has three young boys with his wife Tanya. He says the conservation practices he has adopted are protecting the soil for the future. “I don’t know what the future holds exactly, but it’s my responsibility to do what I can to leave a viable, sound business and healthy land for my kids,” he said. “If any of my boys choose to farm, I want them to be in the best possible position moving forward.”

Nelson earned college degrees in agronomy and animal science from Iowa State University and worked at a grain elevator until 2008 when his father passed away unexpectedly. From that point on he took over full-time farming responsibilities.

“One thing I learned at Iowa State was you need to be a critical thinker and not just do things the way we’ve always done them,” he said.

That type of outlook propelled Nelson to start no-tilling soybeans soon after taking over the farm, and in the past few years strip-tilling corn ground. Strip-till involves knifing an approximately six-inch wide strip into the soil in the fall and incorporating fertilizer.

Seeds are planted directly into the strip of loosened soil. Strip-till can help seed germination and allow for a more precise nutrient injection into corn rows.

Over the last five years, Nelson has planted cover crops in the fall. He is trying to add more cover crop acres every year with hopes of covering all 900 acres this year. He aerial applies cereal rye after harvesting his corn acres and has drilled in oats and barley following soybeans.

“I would like to get a better oat or barley stand in the fall to see if it will help my corn,” said Nelson. “We’re still learning on the non-winter hardy species. Fall growth hasn’t been as good to get the spring benefit.”

Growing rye hasn’t been a problem. Nelson began using a cereal rye cover crop, in part, to provide supplemental livestock feed in the fall and for spring calving.

“Even more than the feed, it’s the calving environment and trying to get them out in the open,” he said. “Sometimes it’s too wet, but when it works, it’s really good.” 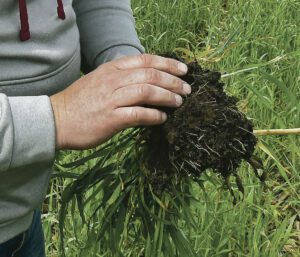 Aaron looks at root structure in his soils on ground he no-tills and grows a cereal rye cover crop.

With Buena Vista County in a moderate drought, according to the U.S. Drought Monitor, Nelson says cover crops are helping to keep moisture in the soil. “This past spring it was really dry here after planting and I feel like the cover crops helped the soil maintain moisture longer than many other farms in the area,” he said. “Tillage may warm up the soil, but it dries it out pretty good, too. I think our crops are a little more resilient and have a little more in the reserve tank when it gets dry.”

“The health of the soil, and frankly, keeping the soil in place are my priorities right now,” he said.

Nelson recently added more cropland by renting from a retiring farmer – a 30-year no-tiller. “There is no way he would have rented the ground to me if I intended to till,” he said. “I feel good that I can go to a landlord and say I am taking care of your land as though it is my own.”

Conservation programs through USDA’s Natural Resources Conservation Service (NRCS) and the Iowa Department of Agriculture and Land Stewardship (IDALS) are helping to offset the cost of adopting new conservation practices.

Nelson utilized state cost-share to help pay for equipment changes when he switched to no-till and strip-till. Environmental Quality Incentives Program (EQIP) funding through NRCS has helped Nelson with funding for pasture and hayland planting and cover crops.

He also received a Conservation Stewardship Program (CSP) contract through NRCS to help build on existing conservation efforts. CSP is a working lands program that helps producers achieve their conservation goals through a CSP plan.

“Aaron is a conservation leader in our community who has the respect of his peers,” said NRCS District Conservationist Larrette Kolbe. “Our staff enjoy working with him because he makes smart decisions and is conservation-minded, and yet he is conscientious about his work.”