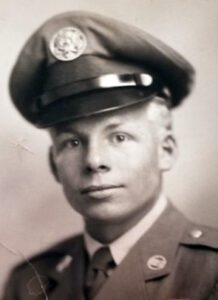 Max Levern Wetherell, the son of Levern and Pauline (Mohor) Wetherell, was born Jan. 12, 1932 in rural Peterson. His childhood years were spent in the Peterson area, where he attended Brooke and Peterson schools.

Max married Betty Lou Joyce Muilenburg on Jan. 9, 1955 in Worthington, Minn. They were blessed with four children: Robert, Rodney (Joe), David and Sherry. Following their marriage, they resided and raised their family in the Peterson area.

After graduating as Salutatorian from Peterson High School, Max and his best friend, Robert Mueller, travelled to Key West, Fla. for sun, fun and relaxation. This would be the beginning of Max’s many globetrotting adventures.

Max joined the Air Force in March 1950 where he attended the U.S. Army Foreign Language School in Monterey, Calif. He learned Russian in six months where he was stationed in Germany to monitor Russian communications. While in Germany, he traveled extensively throughout Europe. Max was honorably discharged from the Air Force in October 1952, when he returned to Peterson due to his father’s health, taking over his father’s trucking business hauling livestock and grain until 1976.

In 1976 he started working for the town of Peterson as the “jack of all trades.” When he was in his 50s, the town of Peterson asked him to take on additional responsibilities as the “Chief of Police.” He agreed and attended the Iowa Law Enforcement Academy in Johnston, and became one of their oldest graduates. He retired in 1995 to take care of his wife Betty. After her passing in November 1996, he became one of the first volunteers in their new valet parking service at Spencer Municipal Hospital until his second retirement.

Max loved the “Valley” as he referred to Peterson and the surrounding area. He had a caring heart, faith in God and enjoyed helping others. Max was a longtime member of American Legion Dean Underwood Post #10, and at one time served as its Commander. He was a member of Peterson First Congregational Church. Max was also one of the original members of Peterson CRU.

On Nov. 16, 2022 at the age of 90, Max peacefully passed away at the VA Hospital in Iowa City, where hospital staff saluted him as he was taken away.

The family would like to acknowledge a special thanks to Kathleen Whittenburg for being his long-time companion and the staff at Wel-Life Assisted Living in Alta, Simpson Memorial in West Liberty, and the VA Hospital in Iowa City for their compassion and caring of Max when he was no longer able to stay in “the Valley.”