Let there be light!

How electricity came to SL 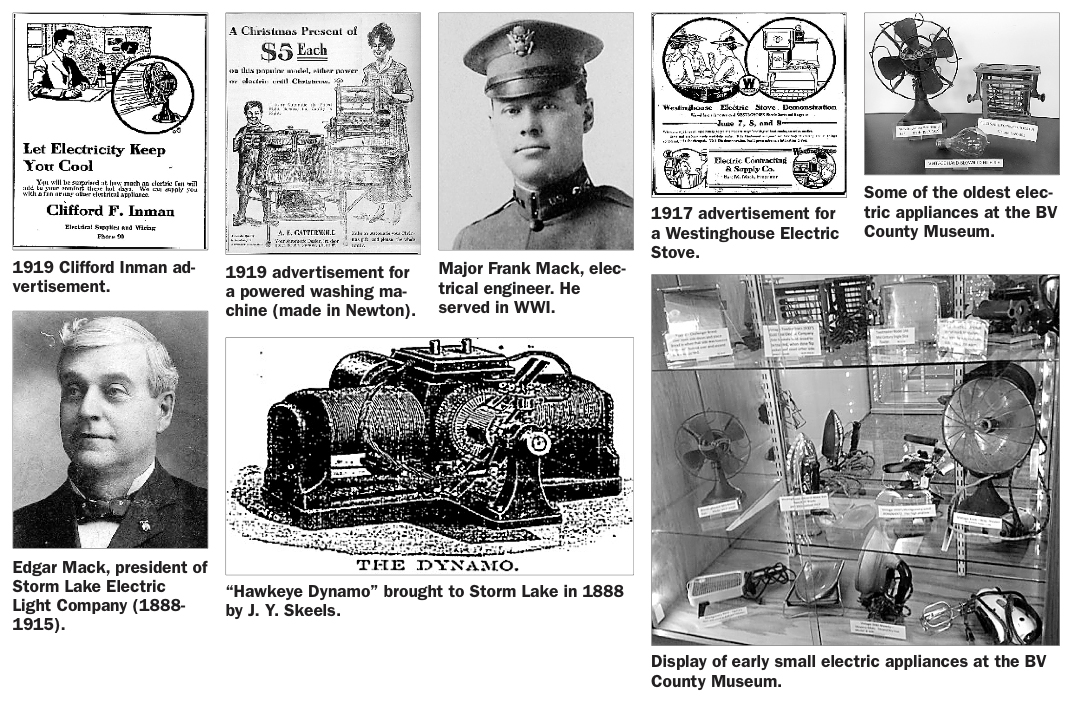 Electrification of our transportation system is a major concern today. In the 1880s, however, the most important issue in this area was to bring the miracle of electric lights to people’s homes, factories and public buildings by this means.

In 1879, Thomas Edison had developed his carbon-fiber based incandescent light bulb, leading to a much improved form of lighting and the removal of more dangerous and more air polluting light sources based on the combustion of oils or coal gas.

The man responsible for bringing electric lighting to Storm Lake and BV County was born in England in 1856 in the small town of Ramsey, now in Cambridgeshire. At the age of 10 he came to the U.S. with his parents and three brothers, and in 1880 he moved to Storm Lake to work as a blacksmith. John Young Skeels (1856-1918) was as much an engineer as a provider of horseshoes. An advertisement for his firm says he “deals in all kinds of pumps, but makes a speciality of iron pumps, cylinders, drive well points, pipes and pipe fittings… I do steam and gas fitting.” He became interested in the production of electricity, and in December 1887 his efforts were well underway in building the first small power plant in town, at the back of the blacksmith’s shop he shared with his brother Ben on the east side of the 500 block of Erie Street.

An article in the Pilot newspaper (March 28, 1888) describes the “Hawkeye” system he installed. It used a 40hp steam boiler connected to a high speed engine linked to a “compound wired” dynamo made in Oskaloosa. The dynamo was able to automatically take care of changes in load resulting from the number of electric lights turned on or off. It created sufficient current for 200-lumen lamps, including 35 new street lamps, in a power distribution system having 10 miles of wiring.

In 1958, well-known Storm Lake lawyer Guy Mack (1880-1967) wrote an article in the Storm Lake Register about both his and his family’s close involvement in the early days of electricity in Storm Lake. Skeel’s struggling early power plant needed capital to expand and in April 1888, he and 12 other businessmen formed the Storm Lake Electric Light Company with capital stock of $10,0000. Guy’s father Edgar E. Mack (1850-1918) was president and Skeels was plant superintendent. In 1895, serious damage to the plant occurred during a fire and next year Skeels quit the electrical power business, finishing his working career as a travelling salesman for a Chicago mechanical engineering supply house.

In 1906, because of the illness of his father, Guy Mack took charge, and in 1911, Edgar Mack’s second son, Frank W. Mack (1881-1934), a 1907 ISU electrical engineering graduate, moved from a similar position in Hawarden to take over running of the plant. Until 1915 the electricity was DC (as favored by Edison), but realizing the advantages of AC and the costs required to make this major change, the locally-owned company was sold in April to the Hooper-Kimball-Burgess Company, with Frank Mack remaining as plant manager. The Iowa Light Heat and Power Company owned the plant until 1927 when the Iowa Public Service was formed in a major power company merger. Frank eventually became construction superintendent at IPS for all of Northwest Iowa.

In 1895, both Alta and Sioux Rapids set in motion the development of electrical power systems. In 1915, Citizen’s Electric was established in Albert City and next year a power line was built to bring electricity from Storm Lake to Newell.

Electricity was expensive early on and largely used only for lighting. Before the days of metering, payment was by a flat rate, depending on the nature of the establishment and the number of lamps being used in it. At first electricity was produced from the onset of darkness until midnight only and initially in Albert City was shut down completely in April. It has been estimated, however, that from 1890 to 1920, electricity prices fell about 6% per year. Other uses besides lighting were developed in the late 19th century and in 1910 the Vidette newspaper published an article: “Shall we have the day Service” and Storm Lake Electric Light and Power predicted this change as well as advertising a line of electrical flat irons, cooking devices, etc.

Searching the Storm Lake newspapers for advertisements for early electrical appliances revealed the involvement of yet another Mack family member in the electricity business: Burt M. Mack (1885-1953), brother to Guy and Frank. In 1910 he advertised demonstrations of a new electric vacuum cleaner at the Mack office in town. The machine could be rented for $1 for half a day with electricity costing a few cents per hour. Pre-Christmas 1916, Burt, proprietor of the Electric Contracting and Supply Co., advertised more than 12 electrical items, including a toaster stove ($6), curling iron ($3.75) and a percolator ($7). The dollar then is worth about $26 today. Neither electricity nor early electrical implements were cheap! Bargain Days in April of that year offered similar items at 25-40% discount. In 1918, Clifford F. Inman (1896-1981), my former neighbor, went into the same business (see advertisement) which included wiring 15 consolidated schools in our area for electricity.

Only 10% of rural Americans had electric power in 1930. That became much changed in 1935 after Roosevelt’s New Deal and the Rural Electrification Administration. Nevertheless, in 1916 the Delco-Light Company introduced a range of generators, much advertised in Storm Lake newspapers in 1919. They operated with a kerosene fueled engine, charged 16 storage batteries and were ideal for farmers that could afford the $275 purchase price.

George Cattermole was selling electric “automatic washers” as early as 1912 (see advertisement). Frigidaire electric refrigerators came into production in 1918 and were being used by Foster’s Confectionary locally in 1926 “to keep our ice cream solid at all times Automatically.” Much of the modern electrical era we are now so dependent on had arrived!