Lesson from a Ukrainian emigré: ‘Life is precious’ 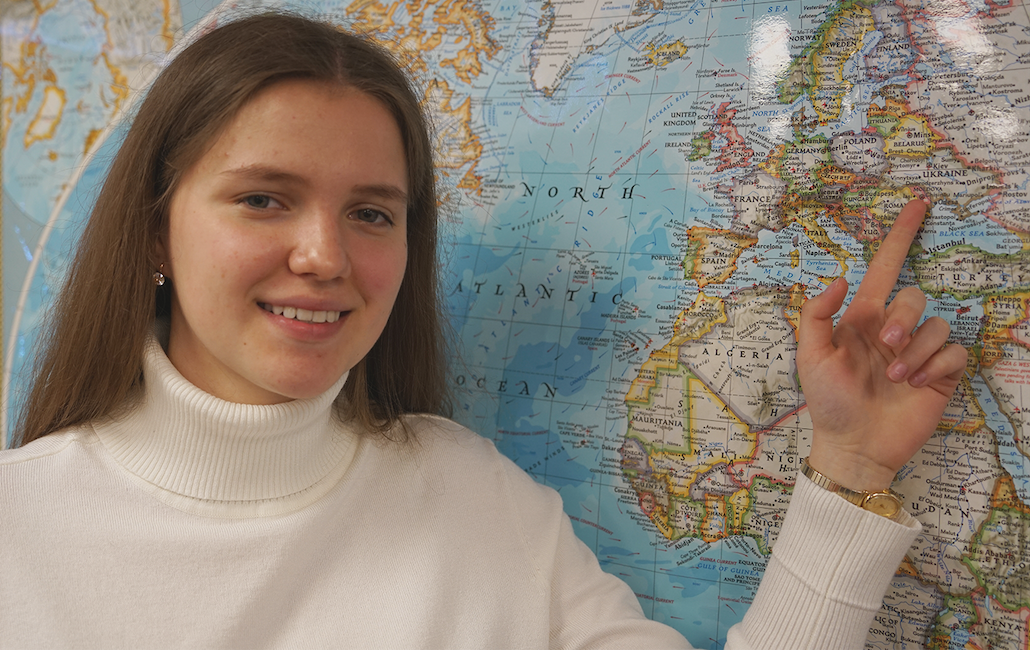 Anna Makarenko is proud of her Ukrainian heritage in this photo taken in a Sioux Central classroom.

Among the Sioux Central High School seniors speaking at graduation May 15 is Anna Makarenko. “Life is precious,” she’ll say, “and we shouldn’t be postponing something we want to do, because we don’t know what’s going to happen.”

These words will have impact coming from the mouth of a Ukrainian. Her family moved to Sioux Rapids in 2017 from Bila Tserkva, a city of 200,000 an hour away from Kyiv.

She loves the safe community she now belongs to, but classmates in her home country have joined the Territorial Defense in Ukraine and her grandparents hide from shelling.

Anna’s father first came to Sioux Rapids in 2016 with a company that sells poultry houses and poultry equipment made in Ukraine.

A year later he was asked if he wanted to move here permanently. He said yes and brought his family along: his wife, Anna and Anna’s sister, Nastia, now 20.

The U.S. government shutdown at the end of 2019 disrupted the Makarenko family’s stay. In order to maintain legal status and to keep Anna’s father’s visa intact, they returned to Ukraine.

Anna was able to graduate from high school in May 2021. Ukrainians finish school in 11 years, not 12.

On her graduation day the news arrived. “We got the information our passports were ready,” recalls Anna. “We were so excited to come back. We couldn’t wait.”

She explains how the family came to love a tiny river town in Iowa. “It was weird at first. The first few nights we woke up because of the silence. At home we lived on the eighth floor. You could hear people talking all the time, and lots of other noise. Cars and trucks.”

Anna’s parents especially like how peaceful it is in Sioux Rapids. Anna herself is ready for a bit more hustle and bustle — more people — which she will find next year when she attends University of Iowa.

“The community is so kind,” Anna repeats, a sentiment that would only grow when everyone learned in February that Ukraine had been attacked by Russia.

“My town was bombed a few times,” She explained. Her grandparents call and text saying they’re “always wearing their outside clothes. They’re always ready to go.”

While her father’s parents live in a small village, her mother’s mother lives alone. None wish to leave the only home they know. And there’s no place to go.

Anna keeps track of her former teachers also. Her English teacher’s daughter was ready to give birth at the time of the invasion. She had to leave Kyiv. But she is safe.

“I didn’t think Putin would attack,” says Anna. “It turns out he is mentally unstable so you can’t expect logical decisions from a person like that.”

At school, Anna’s teachers reached out to her. “They asked how I was doing,” she said. “They asked if there was anything they could do.” Students were supportive too, and she is grateful.

In a Facebook video posted in February, Anna asked friends to donate to a family contact who supports the Ukrainian army. If you are able, donate, she wrote, hoping maybe to raise $3,000.

The Sioux Rapids community and their extension of friends outdid themselves and gave $6,000. A Ukrainian flag flew in town. The school’s FCCLA held a bake sale with proceeds going to the cause.

Anna was thrilled. The money was wired through Farmer’s Bank. She posted photos of the gear purchased — 15 bullet-proof vests and a thermal scope, so essential for night vision. Ukrainian soldiers, their faces covered for security, appeared in the pictures.

Ukraine T-shirts are also being sold by Anna’s sister, who graduated from Sioux Central High School. She is obtaining a degree online from Iowa Lakes Community College while she remains with her family.

“I appreciate that I’m safe right now, but I also feel the need to help and support Ukraine,” Anna says. “Here I can do more. I can share the truth about what is happening in Ukraine.”

She dislikes political division and the spread of false information. “Do you have anything to back that up?” she asks people who make brash claims on issues whether Ukrainian or American, and yes, she’s run into those who aren’t interested in Ukraine. “They don’t care because it’s not their problem,” she says.

With green card in hand, Anna has four more years of the five required to gain American citizenship.

Meanwhile she won’t ignore the troubles in her country, or turn off the TV when images become disturbing. “It’s very stressful, but we can’t close our eyes on this,” she says. “We have to know what’s happening.”

She’ll take her own advice and not postpone what she wants to do:

This summer she is pursuing an internship with Iowa Lakes Corridor. As a Hawkeye, she plans to double major in economics and finance. Overall, she wants to maintain that spunk from the country she left at age 12. “We stand up for what’s right and good. We do not accept a thing just because some one wants it to be that way. It’s in our blood.”