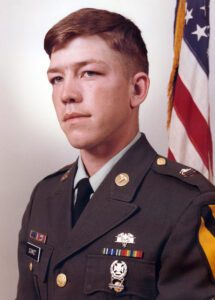 Memorial services will take place Tuesday, May 17, at 10:30 a.m. at St. Paul Lutheran Church in Schaller. Burial will be in St. Joseph’s Cemetery. Visitation will be held Monday, May 16, from 5-7 p.m. at Fratzke & Jensen Funeral Home in Schaller.

Douglas Neil Schmidt was born on Jan. 29, 1962 to Neil and Ruth (Weise) Schmidt in Storm Lake. Doug had a strong Catholic faith his entire life. He grew up attending school in Schaller, and graduated in 1980.

Doug entered the United States Army on Oct. 27, 1981. During his service career, he became an Army Ranger and retired as an Army Green Beret. Doug served as a Special Forces Delta Medic, a HALO Instructor, a Freefall Jumpmaster, Master Static Line Jumpmaster, a Paratrooper and a Special Forces Delta Medic. He served his country in Desert Storm, Operation Provide Comfort in Kurdistan, follow on Provide Comfort Mission ll and lll in Turkey, and Operation Iraqi Freedom. He also did rotations in Bosnia, Kuwait, Herzegovina and Kosovo. He retired honorably in 2003 after over 21 years of service as a Sergeant First Class.

He enjoyed hunting, fishing and archery. You could find him sitting on his front porch, traveling dirt roads and hunting asparagus in his free time. Doug was an avid gardener. More than anything, Doug treasured his time with family and friends. He could always be found cheering on his grandkids at their sporting events. Doug will be deeply missed by all who and loved him.

Doug is preceded in death by his father Neil Schmidt; and his sister Wenda.