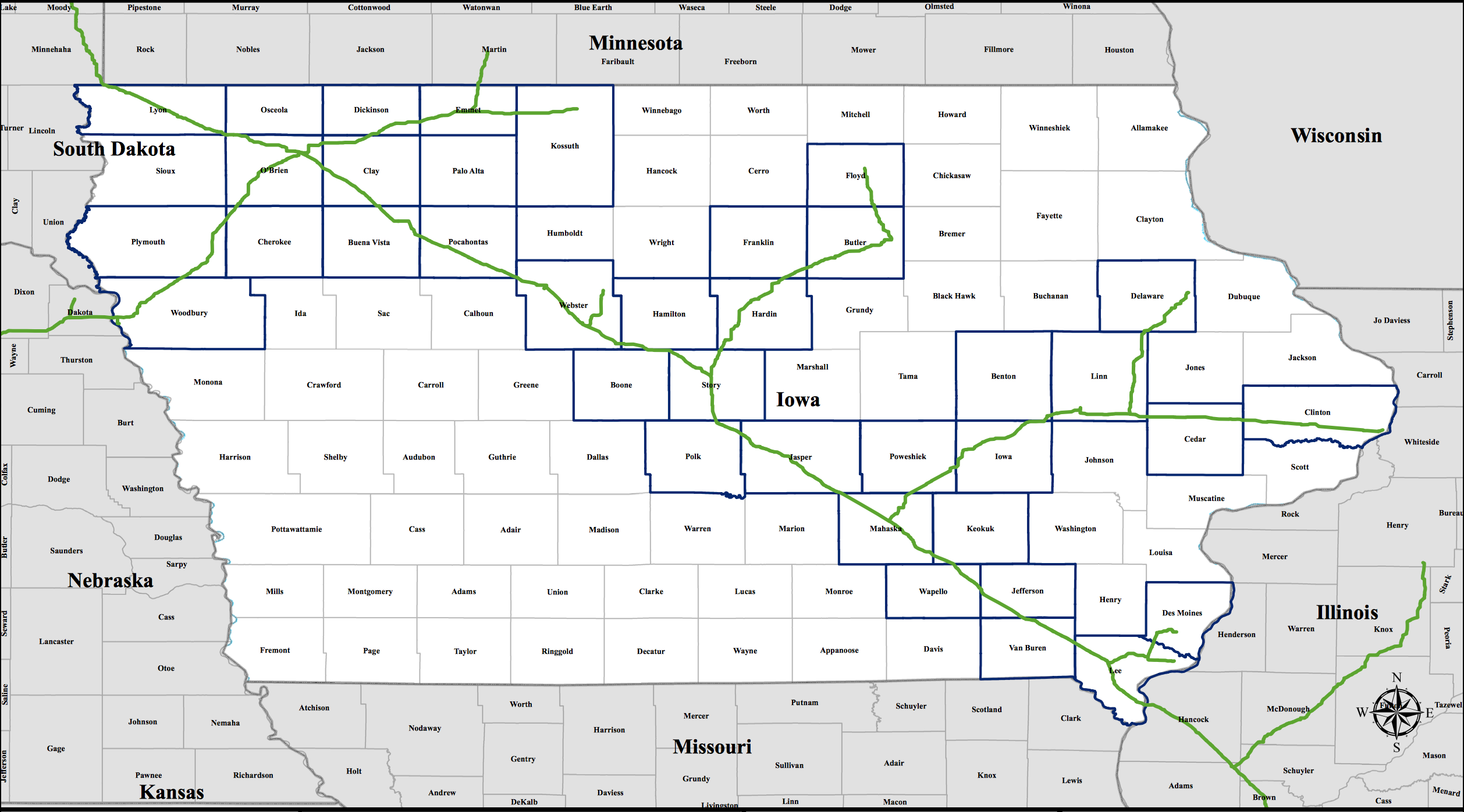 Navigator CO2’s proposed route for its 1,300 mile pipeline that traverses Buena Vista County’s northeastern boundary. The pipeline is expected to be operational by 2025.

The Buena Vista County Board of Supervisors passed a resolution opposed to eminent domain being authorized for the Navigator CO2 pipeline that’s charted to run from Sioux Rapids to Albert City.

Board Chairman Paul Merten said the unanimous vote was made on Tuesday to encourage the company to negotiate in good faith with landowners along the proposed route. He argued it shouldn’t be viewed as though the county has a negative view toward Valero Ethanol in Albert City, one of the county’s major employers.

“We want to see (Navigator) work with the landowners. We’re not entirely positive this is a public use issue or project,” Merten said Wednesday. “That’s what our concern is.”

Buena Vista and O’Brien are the only two area counties to pass the resolution, which will be forwarded to the Iowa Utilities Board’s docket. Snyder brought up the resolution after hearing about it from other counties. Pocahontas County is considering it

Navigator CO2 Ventures, a Texas company, proposes a 1,300-mile underground pipeline that will capture carbon dioxide from Valero, other ethanol plants and fertilizer plants, and transport it in pressurized liquid form to a sequestration site in south-central Illinois. There, the liquid carbon would be injected into sandstone formations to harden and be stored permanently.

Valero and other emitters could capture a total of about $750 million in federal tax credits, or perhaps significantly more if federal lawmakers increase carbon sequestration credits.

Elizabeth Burns-Thompson, a spokeswoman for the pipeline, noted in December that the ethanol and fertilizer plants are the recipient of the tax credits, not the pipeline. The companies are contracting with Navigator in 10-year agreements for unspecified sums.

Valero’s plant manager, Jeff Seier of Albert City, told a crowd of Buena Vista County residents last month the pipeline  is a positive for both the county and the company’s Albert City plant. He said the CO2 sequestration credits are necessary for its ethanol to remain competitive.

Iowa Capital Dispatch reported Navigator will file a petition in May with the Iowa Utilities Board for permission to build. The petition might enable it to force some landowners to allow construction if voluntary easements aren’t obtained, in other words, eminent domain.

The pipeline must demonstrate it serves a “public convenience and necessity” under Iowa law.

Andy Bates, a spokesman for the company, told The Times it’s “too early” to discuss the company’s strategy for eminent domain authority, should some landowners refuse to budge.

Supervisor Kelly Snyder, whose district covers the county’s northeast corner, acknowledged the pipeline pits a major employer’s bottom line against private property rights of some of his most loyal constituents.

He hopes the company strikes voluntary easements with all landowners along the county’s route. Burns-Thompson said last month the company is investing 15% of its $3 billion budget toward long-term easements.

“This board is pro-ag. I’m pro-ag. Everyone knows that,” Snyder said on Wednesday. “We’re here to support ethanol and all, but to use eminent domain on private landowners’ land for a CO2 pipeline, I’m not sure that’s right.”

You have 0 free articles left this month!