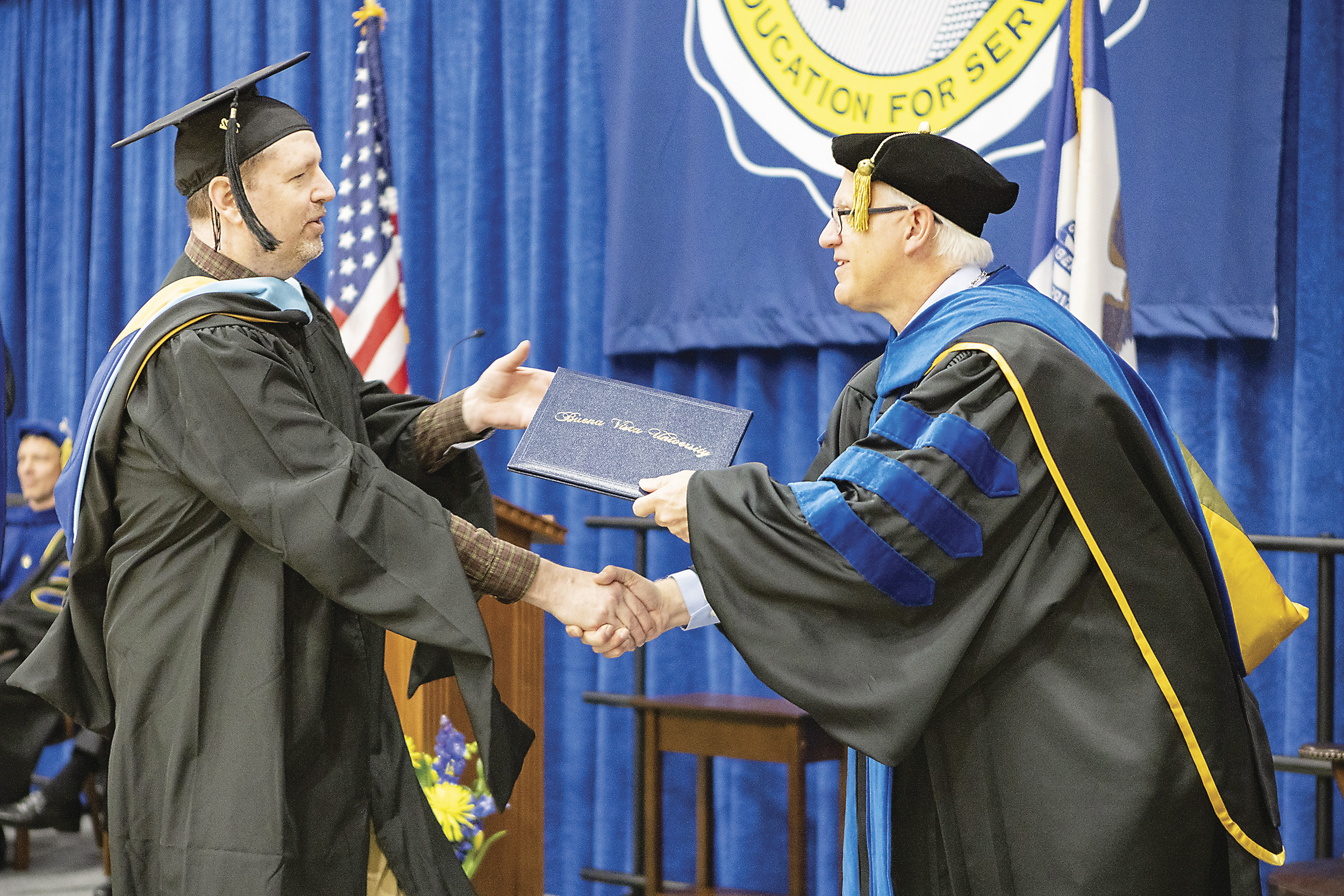 He now seeks to serve others, changing lives in the process.

“I went to treatment for alcohol abuse,” says Jaques, who formerly worked as a parole judge for the State of Iowa. “I didn’t want to practice law any longer, as it was detrimental to my well-being.”

For years, Jaques heard cases and determined whether a person’s parole should be revoked due to a violation. Many offenders violated conditions of their parole by using drugs or alcohol. Some returned to prison; others were granted a warning, then monitored.

Jaques, of Creston, ultimately lost his state position as he violated its no-tolerance policy for alcohol use. He had hit bottom, so to speak, before becoming active in Alcoholics Anonymous. With the never-ending support of his wife, Becky, he investigated becoming a drug and alcohol counselor. Others encouraged him to become a licensed mental health counselor before choosing a career path.

“I saw BVU had a program, and an administrator at BVU knew all about the GI Bill and the fact that, as a veteran, I would qualify for assistance,” he says.

Jaques, a graduate of the Drake University School of Law, served in the US Army and the US Army Reserves, serving as a Major for the latter when called to active duty. He spent five years on active duty as a Judge Advocate General (JAG) attorney, stationed in Virginia, Georgia, Alaska, and North Carolina.

“As a JAG lawyer, I had a role in prosecuting soldiers who had alcohol and drug issues,” he says. “Part of my job as a prosecutor was to hold soldiers responsible to the full extent of the law.”

He contends some soldiers had problems beyond their control. They were young men and women in need of mental health therapy far more than the charges levied against them.

“At some point in my future, I’d love to work with fellow veterans,” says Jaques, who finished his term of activity military service in 2015. “There have been 20 veteran suicides per day since the attacks on Sept. 11, 2001. That equates to 100,000-plus suicides for people who have served our country. I want to get involved in veterans’ mental health issues. I think I can help.”

“The professors have always been available, super knowledgeable, personable, and responsive to emails and questions,” Jaques says. “Within our group of students, many of whom are in their 20s, there’s a rich environment for the exchange of ideas. It’s a safe place where we have open discussions.”

“Daren is a prime example of how anyone can work through the struggles we experience in our lives,” says Ruscitto, director of one of four university programs in Iowa to earn accreditation from the Council for Accreditation of Counseling and Related Educational Programs, joining the University of Iowa, the University of Northern Iowa, and Drake University. “The road of life is not without its bumps, but with determination and support from others (family, church, professionals, etc.) change, growth, and wellness are possible. Daren’s story also shows that is never too late to start over or start something new. Saying that I am proud of him is an understatement. He has been a leader and role model to his peers in the CMHC program. Wherever life takes Daren, I know he will be an excellent addition to those he serves and to the counseling profession.”

Classes went well, Jaques says, and have him excited to serve others as he puts into practice the concepts he’s learned involving theories, research, and diagnostics.

“I crossed this line where I realized I knew theory and could share some of the concepts from classes that might help Becky in her work in special education,” says Jaques, who earned his master’s on May 7. “The light went on for me as we spoke: I’m going to be able to help REAL people!”

And while Becky’s students aren’t clients, they remain an indication to Jaques that he’s got his second wind, on his way to a second career, thanks to BVU’s master’s program in clinical mental health counseling.

“My hope is to one day serve the Veterans Administration, but I’ll go anywhere,” says Jaques, an Iowa native. “I’ll go anywhere in the world the veteran population might need me.”